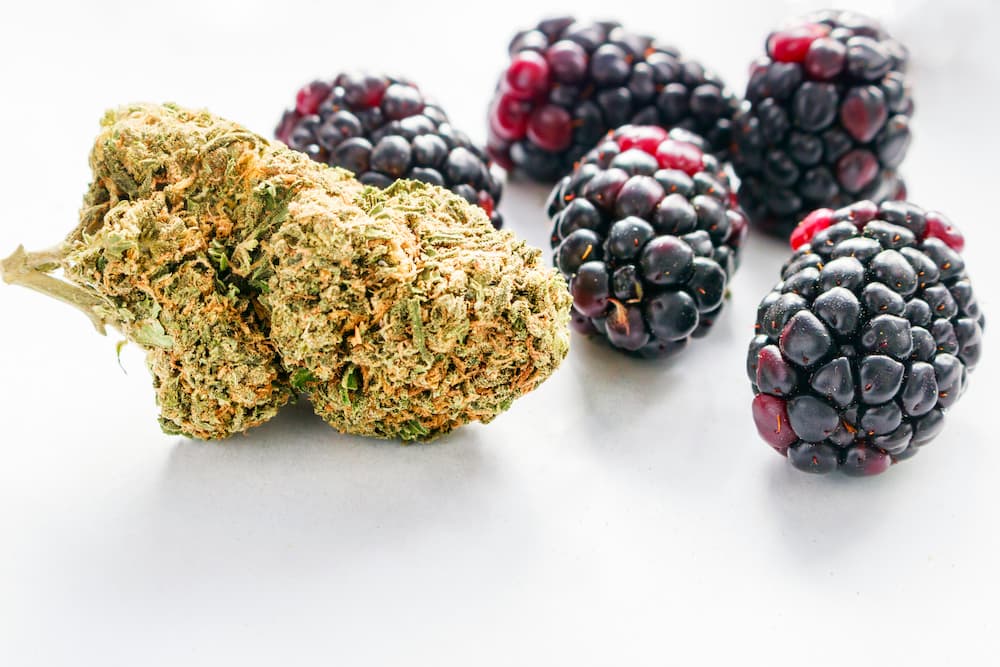 In 2016, the strain took home Second Place for Best Indica at the HempCon Cup Awards, and fans of Blackberry Fire have plenty of positive things to say about its enjoyably balanced buzz.

With a reported THC content of around 23%, the effects of Blackberry Fire definitely don’t disappoint in terms of intensity. For first-timers, it’s helpful to be aware that Blackberry Fire effects can take upwards of 15-20 minutes to set in – so be sure to take things slowly until you’re familiar with this potent strain.

Usually, consumers first notice a sweeping cerebral high that infuses their mind with interesting, creative thoughts. Some describe a slight pressure around their temples, while others report feeling slightly flushed. Oftentimes, the enjoyable rush of creativity is accompanied by a solid supply of energy, helping you feel invigorated and ready to take on just about anything.

Within a short period of time, the physical effects of the Blackberry Fire strain begin to take hold. A full-body relaxation is the most commonly-reported feeling, with tense muscles and soreness seeming to slowly melt away. When consumed in higher amounts, Blackberry Fire can produce couchlock; as a result, many people choose it as an evening or late-night strain.

For MMJ patients, Blackberry Fire is often noted as a highly effective option for individuals aiming to support improved moods. The energizing, uplifting feeling that often results from Blackberry Fire is frequently described as a positive experience by MMJ consumers with low mood feelings, as well as individuals dealing with stress.

Additionally, the strain is popular with medical marijuana patients dealing with chronic pain, including both short-term injuries and long-term conditions such as fibromyalgia or migraines. Finally, because its indica properties tend to come on the scene within a few hours after use, Blackberry Fire may be helpful for managing insomnia.

Like any high-THC strain, Blackberry Fire is one that new, inexperienced consumers should treat with respect. If you tend to have unpleasant experiences with extremely potent strains, this may not be the right match for you. However, if you’re willing to take it slow and find your “sweet spot” with Blackberry Fire, it may become one of your all-time favorites.

Before you experience the flavor of Blackberry Fire, its sweet berry aroma hints at what is to come. A second or third whiff can clue you into subtle hints of hash, and grinding the flowers releases a strong scent of diesel.

The strain’s fruity smell carries over into its tasty flavor, which is dominated by notes of fresh, perfectly ripe berries. There are also elements of herb and hash woven throughout, though they remain pretty subtle.

The most abundant terpene in Blackberry Fire is myrcene, known for its herbal, earthy scent. Myrcene is followed by caryophyllene and limonene, for a well-rounded terpene profile across the board.

If you’re interested in purchasing the Blackberry Fire flower in Long Beach or want to know more about products containing this high-THC sativa hybrid, we invite you to stop by King’s Crew Dispensary.

Our Southern California dispensary is a leading provider of premium cannabis, including an outstanding variety of strains both rare and widely popular. Whether you know exactly what you want or you’d appreciate some expert guidance, the King’s Crew team will deliver an exceptional dispensary experience from beginning to end.